Either way, what matters is how they perform. And I’ll tell you right now, the Milwaukee FUEL blew the doors off the DeWalt. In this review I ran them both against my 3 amp corded Makita.

All three tools in the test have a top speed of 20K oscillations per minute (OPM). With a 5amp battery the Milwaukee weighs 4.3 lbs and the DeWalt weighs 3.6 lbs. And both the Milwaukee and DeWalt are brushless, have work lights, a tool-less blade change.

To clarify things a bit the DeWalt DCS356, DCS355, and the Atomic DCS354 are all the same unit. The difference being the Atomic only runs up to 18k OPM, where the the other two go up to 20k. And only the DCS356 has a 3 speed selector switch.

The Milwaukee plunge cut through wood almost three times as fast as the DeWalt. And it sanded more than twice as fast. They were both pretty fast on nails and copper but the Milwaukee still cut faster, in part because it was a little easier to control.

The Milwaukee had the best grip and was the easiest to control. They’ve moved the speed selector and on/off switch down on this model compared to the 2626. This gives more hand room up top, which makes the tool easier to control.

The Milwaukee speed dial, however, is located right under your finger. So if you hold the tool by the lower grip it can change speed as the tool vibrates under your finger. No problem for me, as I keep one hand on the battery and one hand up front. If I do hold the grip it’s for guidance and not with a full grasp.

The DeWalt has good control as well but the upper grip area is cluttered by the trigger and the quick release blade change bar. These are two features of the DeWalt I could do without.

Both tools are good on vibration but the Milwaukee is slightly better. Even though the Milwaukee has a looser battery, which is a little annoying. The Milwuakee battery terminals float around more than the DeWalt terminals on these tools.

The DeWalt’s claim to fame is the quick release spring mechanism for the blade change. It is much faster when using universal (open end) accessories, which I prefer for any multi tool because they are easier to install and adjust.

That said, the Milwaukee has a pretty fast blade change for universal blades and is better when using regular accessories. Actually it’s much better.

One reason being, the adapter that comes with the DeWalt has face pins that do not line up with the holes on regular accessories from Makita, Bosch, or Milwaukee. Whereas, the Milwaukee can take all of these brand’s accessories with no adapter needed.

This new M18 multi-tool from Milwaukee cuts like a reciprocating saw and sands as good as an orbital. It’s 2-3 times faster than the DeWalt with better control and less vibration. In my opinion the Milwaukee 2836-20 is a pro level tool while the DCS356 is the tool pros use if they are on DeWalt’s battery platform.

Hopefully DeWalt will come out with their own next level oscillating multi-tool? I’d like to see them replace the trigger and quick release blade change for an on/off switch and a speed dial. Basically, make a yellow Milwaukee that sits up and here’s my money.

See these tools in action in the video below, and thanks for stopping by. 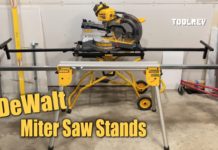 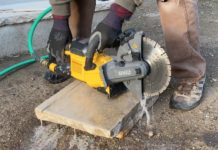