DeWalt says running the DCS573 Flexvolt Advantage saw on a 6 amp hr Flexvolt battery gives it up to 77% more power than using a 5 amp hr 20V battery. In my testing I found that to be true.

I also found the Advantage is slower than the actual Flexvolt DCS578, slower than the 6.5″ DCS565 on a 5amp 20V battery, and only as fast as the 6.5″ on a 6amp Flexvolt battery. Check out this video review to see what I mean.

So what do I think about the DCS573 Advantage saw?

Second, I rarely run out of juice but when I do it’s the 60V batteries that come to the rescue, not the other way around. So the idea of running out of Flexvolt power and needing a 20V to finish a cut doesn’t resonate.

All that said, people have different reasons for what tools work best for them so I wouldn’t be surprised if the Advantage saw was a better choice for some. For me it’s a hard pass. 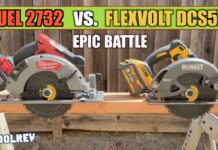 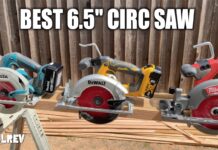