The freedom of cordless is amazing but being tied to any one brand of tool sucks.

I don’t need to ask manufacturers if it’s okay to use their tools or batteries with adapters because the answer can be found in any tool manual. They all say the same thing in the “Battery Use and Care“ section, which is only use batteries and chargers specified by the manufacturer of the tool.

So what are the risks?

The main thing you hear is adapters may break communication between the tool and battery, thereby disabling the electronic protection system (EPS). And every adapter I have warns to not use it for charging so it seems there are communication issues.

What does an EPS do?

An electronic protection system basically protects the battery from overloading, overheating, and over-discharge.

Overloading, according to Makita, means “The tool is operated in a manner that causes it to draw abnormally high current”. When this occurs the EPS kills power, stalling the tool.

Overheating, the enemy of runtime, will also trigger an EPS to shut down the tool.

Over-discharging of the battery can reduce its rechargeable lifespan. And word on the street is “deep discharge” can turn a battery into a brick that will no longer take a charge.

Let’s Look at a Few Systems

Milwuakee has Redlink Plus on many, but not all, of their currently sold cordless tools. For example, the 2630-20 6.5″ circular saw doesn’t have Redlink, nor list any type of EPS in the manual. And this quote from the manual on page 7 regarding overloading seems to indicate there is no EPS;

“CONTINUOUS OVERLOADING MAY CAUSE PERMANENT DAMAGE TO TOOL OR BATTERY PACK”

Again, an EPS prevents overload, which leads to overheating and faster discharge of the battery.

Okay, so if there are cordless tools being manufactured and sold without an EPS, how is using those tools any different from running a battery adapter on a Redlink Plus tool, assuming the adapter breaks communication? Leave your thoughts in the comments👇.

Now check out this “Stanley Dirt Monkey” video where a Milwaukee rep tells of how their batteries have a built in EPS that protects the battery if you hook it up to a “product that it’s not intended for.”

If it were me talking to that rep I would have said, so Milwuakee batteries can be used effectively with adapters to run competitor tools, no? Would have been classic to hear the response.

Now let’s look at this “Project Farm” vid where they test a Milwuakee and Makita battery on a DeWalt blower through an adapter and the Milwaukee doesn’t cut power when the blower stops but the Makita does.

So the Makita cut power despite being on an adapter but the Milwaukee did not. But the blower cuts off at around the same voltage on both batteries and that blower has an EPS, so take from that what you will.

“added protection” that stops the tool if “STAR detects conditions that threaten to overload, overdischarge or overheat the tool or battery.”

So that may be what we saw in the Farm vid above, the Makita shuts down ahead of time and maybe that Milwaukee would have done the same eventually.

All DeWalt lithium ion tools have an EPS that “will protect the battery pack against overloading, overheating or deep discharge.”

So DeWalt batteries on DeWalt tools have some protection but I have read somewhere in DeWalt’s literature that running their lithium batteries past the slow down point reduces rechargeable lifespan.🤔

I can tell you this, I’ve literally smoked a DeWalt 20V 3/8″ drill mixing mortar and the EPS didn’t do anything to stop that tool from overheating. I mean it was smoking. Still works, by the way.

Now, to really scare you, check out this “Philly Fixed” short. No pun intended!

Probably just a loose connection but sparks coming out of the battery area isn’t great. He said the drill and battery were fine and that he trashed the adapter. Not sure what point he’s trying to make but there you go.

The main issue using adapters seems to be over-discharging the battery possibly shortening its rechargeable lifespan. As we’ve seen Milwuakee says their batteries are internally protected and it seems Makita’s work the same way.

I’ve used adapters on Milwaukee nailers but shy away from using them on tools that tend to over heat like ripping saws and drills. That said, I have run the M18 Fuel multi-tool pretty hard on DeWalt XR and Flexvolt batteries pulling floors with no issues.

If you’re worried about an adapted battery being ruined, or worse, I can’t tell you that won’t happen. For me, they seem safe enough if used thoughtfully and I like them for certain tools.

Let us know your thoughts in the comments.

Here are the adapters I’ve been using:

If you want to see adapters in action check out this multi-tool review. 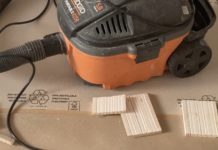 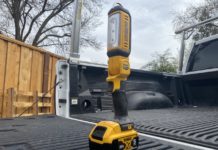 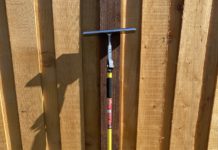